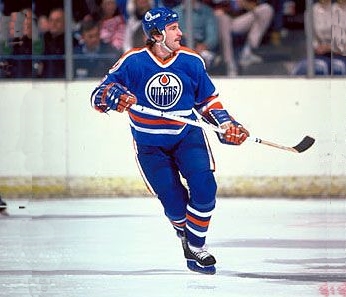 On September 19, 1991 Anderson was traded, with Grant Fuhr, to the Toronto Maple Leafs, where he played two seasons and part of another. There, he reached the 1000 point plateau and played a key role in the Leafs’ 1993 playoff run to the Conference Finals. The Leafs traded Anderson to the Rangers, where he won a sixth Stanley Cup 1994. 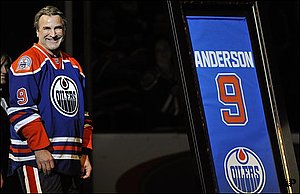 Anderson was noted for his aggressive “to the net” playing style, typifying the NHL power forward in the early 1980s. Noted as a “clutch” player, he was able to score key goals when the team most needed them.

On June 17, 2008, it was announced that Anderson would be inducted into the Hockey Hall of Fame as a player. He had the largest alumni turnout since the Heritage Classic for his jersey retirement. He completed working on a film involving former Canadian and Russian Hockey players called From Russia with Love which aired in 2012.

David Hunter chair of the Long Pond Heritage Classic organizing committee commented “We are thrilled to have Glenn Anderson join us for this year’s event. He was here on a tour this week and stopped to visit the Birthplace of Hockey’s Windsor Hockey Heritag Museum. On Saturday we received word that he could join us for this years event and we couldn’t be more pleased!”

The Long Pond Hockey Heritage Classic began as a charity fundraising event in February 2011. Proceeds from the annual event serve to support the Windsor Hockey Heritage Museum and the Society’s work in promoting Windsor NS as the Birthplace of Hockey.

This year’s event begins on Friday Night with a charity game (grudge match), between the local Windsor Fire Department and the RCMP. Saturday is filled with a day of hockey where participants and teams play with a select group of former pros and all stars. The day’s games are followed by the ever popular post-game banquet and Hot Stove Hockey Talk.

For details on banquet tickets (tables or individual tickets) or to register as a player or team email: Contact Long Pond Classic.