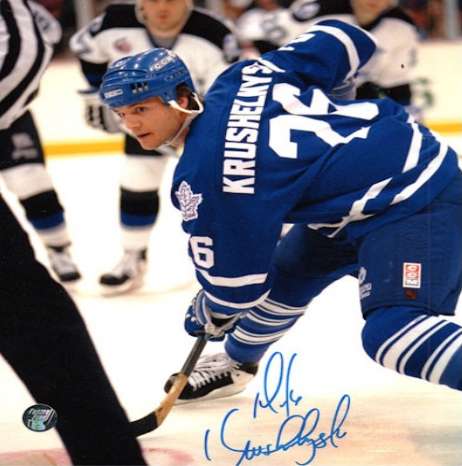 The Long Pond Hockey Heritage Classic Committee has announced that Mike Krushelnyski has joined the lineup for the 2015 Long Pond Classic.

Mike Krushelnyski is a Montreal native who enjoyed a 14-year NHL career, this big left winger/center was drafted by the Boston Bruins and spent three seasons with them before being traded to Edmonton.

In his first season with the Oilers (1985), Mike scored 43 goals and was namedto the NHL All Star Team.  “Krusher” would go on to win three Stanley Cups with Edmonton in 1985,1987 and 1988. “Kruzer” was then traded to Los Angeles with Wayne Gretzky in a blockbuster tradefor the 1988-89 season and spent three seasons with them before being dealt to the Toronto Maple Leafs, where he spent four seasons, and was part of their 1993 Conference Finals team.

Mike concluded his NHL career as member of the Detroit Red Wings and would win his fourth Stanley Cup as an assistant coach with the Wings in 1997. He would go on to become the head coach of CapeBreton in the AHL, Fort Worth in the CHL, the Ingolstadt Panthers in Germany and Vityaz Chekhov of the KHL.

When asked about this year’s event David Hunter, chair of the organizing committee commented,  “We are really so very pleased to announce that Mike Krushelnyski has joined this year’s lineup. He joins Charlie Banfield and JP Bordeleau.  With other details to follow shortly we really looking forward to another successful Long Pond Classic event.”

The Long Pond Hockey Heritage Classic began as a charity fundraising event in February 2011. Proceeds from the annual event serve to support the Windsor Hockey Heritage Museum and the Society’s work in promoting Windsor NS as the Birthplace of Hockey.

This year’s event begins on Friday Night with a charity game (grudge match), between the local Windsor Fire Department and the RCMP.  Saturday is filled with a day of hockey where participants and teams play with a select group of former pros and all stars. The day’s games are followed by the ever popular post-game banquet and Hot Stove Hockey Talk.

For details on banquet tickets (tables or individual tickets) or to register as a player or team email: Contact Long Pond Classic.