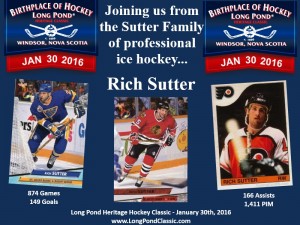 Rich Sutter of the Sutter family, one of 6 NHL brothers to have played professionally has committed to this years’ Long Pong Heritage Hockey Classic.

David Hunter, chair of the organizing committee for this year’s event was pleased to make the announcement. “We’re thrilled to have somone of Rich’s reputation to join us at this year’s fund raising event”, said Hunter.

Rich Sutter was drafted 10th overall by the Pittsburgh Penguins in 1982. During his professional career in the NHL Rich Sutter played for the Pittsburgh Penguins, Vancouver Canucks, Philadelphia Flyers, St Louis Blues, the Tampa Bay Lightning  the Toronto Maple Leafs and the Chicago Blackhawks.  During his career in the regular season he notched up 874 games, 149 goals, 166 assists and 1,411 minutes in the penalty box.

Adding to this year’s roster, Rich Sutter will join Guy Lafleur as part of this year’s Long Pond Classic which began in 2011 . The event is run by a local volunteer organizing committee which supports the work of the Windsor Hockey Heritage Society in its efforts to promote Windsor as the Birthplace of Hockey.